The Big Apple is home to Wall Street, Lady Liberty, and some of the best deli on the East Coast. Upon arrival in New York City, my first decision was to visit the local grand stores. One particular store is the American headquarters of one of the three largest videogame companies Nintendo of America, “Nintendo World.” What I did not know was that the store was in celebration.

Located right next door to famous Rockefeller Center, Nintendo World was sadly shut down for duration of a few months for store renovation. However, many fans shouted in joy as the shop reopened February 19th. The crowd turnout was breath taking as fans lined up all the way to the center’s ice rink, waiting on average three to six hours. Luckily I came the next day when no one was around.

Nintendo World has reopened its doors to the public with a brand new look and open arms. Fans from all around have gathered here to enjoy some shopping, experience some history, and have fun.  Nintendo has spent well over 25 years producing video games for people of all ages. Their colorful characters, catchy music tunes, and amazing game production have effectively become a culture staple for many people both old and new. From humble beginnings of 8-Bit cartage era using pen and paper, to their never ending modern handhelds, to their new technology Nintendo has a rich expansive history that even non-fans of video games could enjoy.

For many fans, including myself, the main attraction of the shop is obviously the merchandise that can only be found in this small two leveled gift shop. Obviously the video games themselves are sold, but other cool merchandise can be found such as lunch boxes, hats, and over abundance of plushy dolls, books, and other collectables.

Nintendo World is also gearing up for celebration of Pokemon’s 20th year anniversary. Yes, that odd monster collecting phenomenon that took over America’s youth so long ago is back and is now celebrating twenty years of making such an impact. The anniversary was just celebrated February 26 with a supposed huge gathering of both young and old fans.

Before I left to venture other various shops I was lucky enough to have been paid a visit to the famous Italian plumbers brothers who were on their way to a small show. After an exchange and a few laughs I headed out of the shop to continue my trip to the Big Apple. If you ever plan to visit New York and are fan of either videogames or history give the brand new Nintendo World of New York a visit. You will never find such a unique shop in the entire country and you will definitely find something that would make you smile. 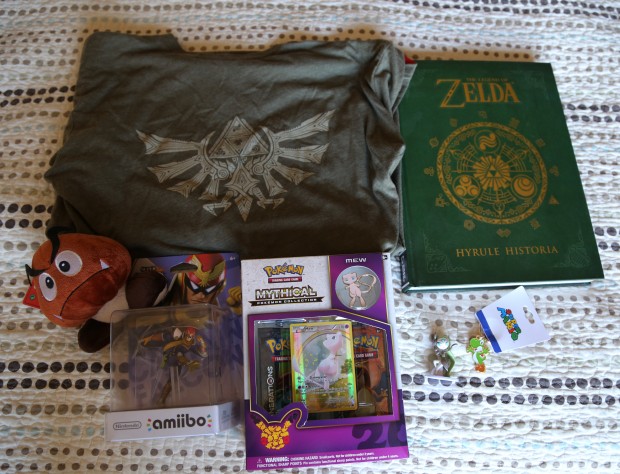 I got to admit, they have a lot of cool stuff that I just had to have.