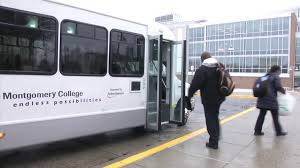 While waiting for the 55 Germantown bus to come by campus around 11AM on Monday, November 2nd, I became observer of a scene which came as both a surprise and a shock to me.

When the campus shuttle came by, a student in a wheelchair who did not want to be named tried to get onto the shuttle, and was told it was not wheelchair accessible. When students already on the shuttle heard this, they seemed uncomfortable; one student even offered to help bring the student’s wheelchair up the shuttle steps.

The student did not get onto the shuttle, and instead, waited for the bus so that he could go to the Rockville campus, declaring “all campus shuttles are supposed to be wheelchair accessible” to those of us standing at the bus stop.

Baffled that this incident happened, I contacted campus parking who is responsible for the shuttles that run between campuses about this issue. I was notified that all campus shuttles are equipment with “ADA lifts and tie downs”. Surprised to hear this information, I explained the situation to campus parking who stated that “the normal shuttle must have been delayed or broken down and they added an extra run with another shuttle”.

The college’s shuttle contract representative issued a response regarding this matter after I brought this issue to their attention, saying that “The scheduled driver for that day had an issue with his personal car. We missed the 9am shuttle from Takoma to Rockville and the round trip to Germantown. Which is why there are no numbers on the passenger totals for that time frame. We pulled a backup bus from another contract so we get on schedule at 10:30am from Rockville to Germantown. That was the vehicle that wasn’t logoed and wasn’t ADA accessible. When the driver got to Takoma, he switched to the regular bus. In the future if we have to use a different vehicle, we will make sure it an ADA vehicle. Sorry for any inconvenience”.

While this explanation adds background to the incident, it does not address the matter that a student was denied access to a publicly provided service due to a handicap. Even if the regularly running shuttle was delayed or broken down, all students should be able to ride them and wheelchair inaccessible shuttles illustrate how much work still needs to be put in to make sure everyone is given the same access to public transportation they deserve.