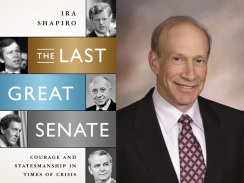 At 7 PM on Wednesday, April 10, Ira Shapiro will speak in Globe Hall, located in the High Tech Building on Montgomery College’s Germantown Campus. Shapiro will speak about his book, The Last Great Senate, as well as his career and the current political climate. The event is free and open to the public.

Shapiro started working with the U.S. Senate in 1975 and rose to several senior positions before completing his work with the senate in 1987. Shapiro was then named General Counsel to the Office of the U.S. Trade Representative. Shapiro helped realize the North American Free Trade Agreement and the Uruguay Round, the trade agreement that led to the creation of the World Trade Organization.